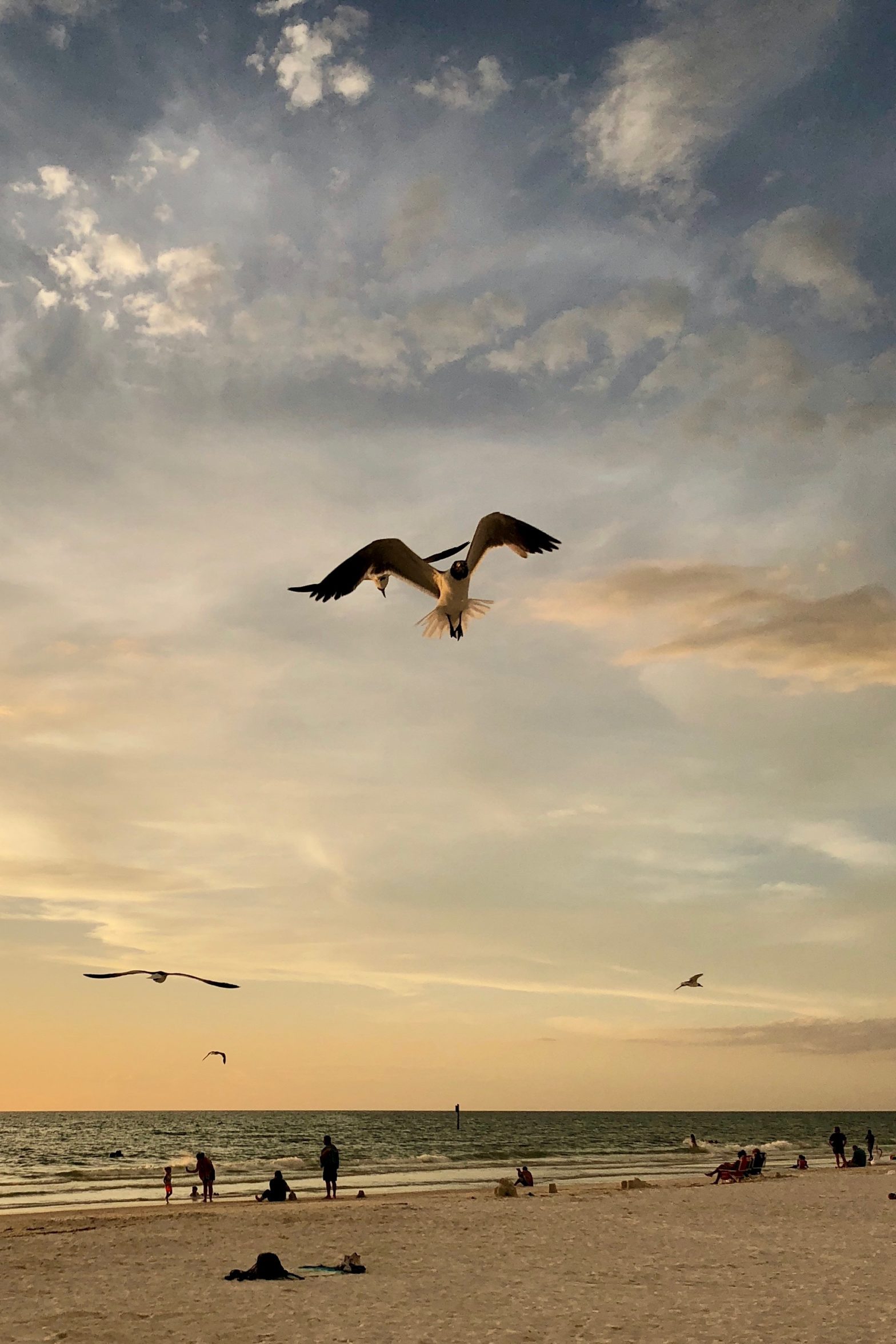 “The seagulls sure are beautiful, Mom,” said one of my kids on our first evening at the beach in Florida. “Yeah, they are pretty cool,” said the other. “It’s like Finding Nemo!” The two of them started chirping: “Mine Mine Mine Mine.”

Our family started each morning in the ocean, then drifted to the pool where my kids discovered the joys of poolside dining for lunch. After lunch and some pool play it was back to the ocean, and then back to the pool again. All in all, they each ate six consecutive meals of the same thing: PB&J for one and grilled cheese for the other. They were hungry!

So were the seagulls.

We warned them. The waiter warned them. The seagulls were everywhere and aggressive. If they left their food unattended for a moment, those gulls would swoop in and grab it. They even saw it happen once to a leftover chicken tender. I was really impressed by the how the seagull ate the whole thing in one bite.

So when our son jumped into the pool to play with a new friend, I thought nothing of it. I did not notice he had only eaten half of his grilled cheese. Within moments, the seagull flew in and grabbed the other half of his sandwich. His startled parents yelled “Whoa” when the seagull’s wing knocked my hat off.

Our son cried out in disappointment and shock when he saw his favorite food was gone. He quickly got out of the water and said “Oh no!” His startled parents gave into temptation and criticized, “That’s what you get for leaving your food when we warned you about the seagulls.” Then they remembered the goal was to let him learn the lesson himself. He stormed off and jumped back into the water.

I ran through my 3 Steps. I noticed my desire to criticize, which was really a desire to fix my son and keep him from doing it again. I noticed that he was already upset that the bird had taken his food. I decided the best something I could try from here was to be quiet and let him learn what he could.

A few minutes later he came over to me and said “I can’t believe that seagull stole my grilled cheese. I was hungry!” I said nothing and stayed neutral (no disapproving look) and I waited. Yes, I wanted to point out to him that it wasn’t the seagulls fault. A seagull is by nature  an aggressive predator and scavenger. But I managed to restrain myself.

It worked. A minute later he said, “I can’t believe I let the seagull get my sandwich.” A moment later he repeated it. When it was clear he was ready to interact we opened his animal crackers together. Fortunately, they were in a package that survived the seagull attack.

He had internalized the lesson. But we had to get out of the way for him to do it. Research from the 1980s showed babies at six months old internalizing their own learning experiences if parents were quiet long enough to let them. But the parents needed to be quiet and avoid immediate praise. I think it’s true of instantly criticizing (pointing out what they did wrong) too. (See Brazelton)

Why did our critical comment matter? Wasn’t it just pointing out the lesson he needed to learn? And wasn’t that what our parents would have said? The research on criticism is interesting. It turns out that most of the time when we use our critical parent voice, we inhibit learning. At best we simply irritate our children and lead them to react defensively, at worst we trigger shame and they shut down.

So he learned through natural consequences meted out by nature in flight. He had to suffer a tiny bit of hunger. No, we did not buy him another dinner. Yes, we did let him eat a granola bar when we got back to the room.

But can we do natural consequences when it really matters to us?

My husband does a great job getting the kids’ sunscreen on when we are headed out. Our other son hates putting sunscreen on his face. When I’m in charge I ignore his complaints and put the good stuff on his face as gently as I can. I was unaware that when he is in charge, my husband had reached a compromise with him. He puts the sunscreen on our son’s hands and lets him apply it to his own face.

But this day, which was to be our biggest beach day, my son simple refused to put it on his face, despite warnings about sunburn. “Fine, that’s your choice,” my husband said. So later, when I noticed a significant sunburn on his face, my husband explained what had happened. “He has to learn sometime,” he said. Well, I did a great job remembering not to criticize the kid, because I was busy explaining to my husband why I never let our son refuse the sunscreen. “I see where you are coming from, I know we are trying to do natural consequences, but it’s sunburn.” My husband, who is not a doctor, gave me a blank look. I explained, “I guess I know too much about the risks of skin cancer and how childhood sunburns are a big contributor.”

But later, when my son came up to me and said, “Mom I learned my lesson about sunscreen on my face. I’ll always put it on now,” I thought again. I’m so glad he had this experience with us when he could have a learning opportunity (and it was a non blistering burn) rather than out with his friends and end up with a severe burn.

Our perception of risk and danger.

We all intend to teach our kids by allowing natural consequences, but we often don’t follow through because of our perception of danger. How dangerous is the consequence? Is it an acceptable risk?

I’ve seen a photo of my great uncle at age 4 holding a hammer because he was helping his father fix things. With actual nails. They didn’t protect him, they expected him to learn how to avoid hurting himself with the hammer by using it. They knew he would probably hurt himself in the process. That was normal in that generation. I used to walk to the corner grocery store to buy things for my mother at age 7. That was still normal in my generation.

These days I watch parents dive for their child when that child tries to walk on the floor without socks. The Washington Post just published “This year, let’s parent like it’s 1989.”

What is dangerous? What is a good learning experience? I think if we keep asking ourselves these questions and challenging our anxieties we can grow as parents. The 3 Steps of Should-Free Parenting can help us understand more accurately what is truly dangerous.