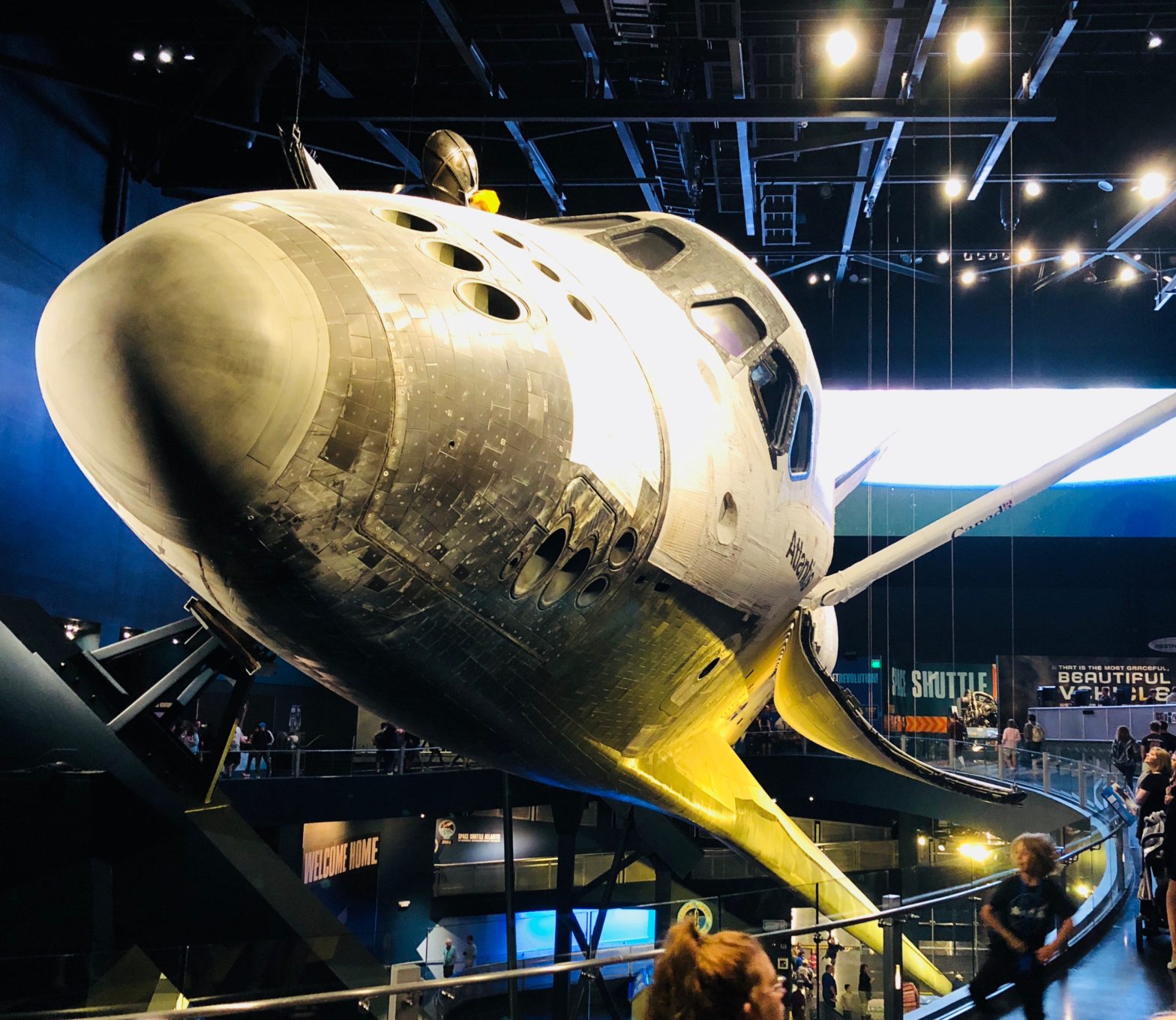 We drove an hour from our hotel to get to NASA’s Kennedy Space Center. Our younger son had spontaneously come up with what must be this generation’s version of “Are we there yet?” He kept asking “How many miles left?” He was keeping count and insisted I check the GPS to give him an accurate number. It was both cute and irritating.

Meanwhile, my husband gave our older son math problems: “If we are going 60 miles an hour and we have 20 miles left, how many minutes will it take?” Our son thought for a minute and then sounded delighted when he gave his answer. My husband leaned over toward me and told me quietly: “My Dad used to give me math problems like that on family road trips.”

I felt my heart expand a little bit. I loved seeing him like this.

You could see rockets!

You could see them from the parking lot. But when we got close and we could really get a look at the rockets, I felt like a kid. I saw the mirror of my own expression in my husband’s huge grin. We wanted to see everything, but the kids rushed us. They took quick looks at the rockets, climbed into space pods and then were ready to move on. “Isn’t there more to do?”

The kids complained about the short lines and waits we had. They were underwhelmed by the view of the space shuttle, while my husband and I were ecstatic. They complained about waiting in the line for the launch simulator. They were not interested in the fascinating interactive exhibits (which really surprised me because they usually like science.) We parents were getting annoyed. Our NASA family vacation was not turning out like we hoped.

We were under pressure, so I did a quick run of the 3 steps. I initiated a stop and asked my husband to stop too until we could think about it. I ran through my sigh and see steps, and recognized that what I should try was nothing for right now. Walking around Kennedy Space Center with frustrated children was not the time to make a radical change in our parenting.

As we walked around I allowed myself to sigh again and try to practice a more thoughtful 3 step sequence.

Seeing Our Kids, Seeing Ourselves.

So far, I’ve written a lot about how the SEE step is about observing our kids. But sometimes, we can also do it in our imagination.

I moved to my see step. It was true that when my children were behaving this way, I heard ungratefulness. But that was my interpretation. Could I look at my children and see what was really going on with them? I engaged my imagination and did my seeing there. I said to myself, “Let me think about how I would have felt as a the little girl at the Kennedy Space Center.” It only took a moment to realize how frustrating I would’ve found it.

I remembered the butterflies; the way I would expect everything to be wonderful and magical, and how frustrated I would feel when it wasn’t. How much I hated the heat when I was a kid. Or when we would go to the museums to look at the old wooden ships and imagine what it like to voyage on them. But I hated when my dad would want to go slowly and read everything.

On every family vacation there are a couple days of adjusting. Everybody has to get used to being thrown together and in each others’ space. The kids remember the magic of past trips, but have forgotten they’re going to have to wait in long lines. Also, there are ice cream or gift shops every three yards, designed to make them want things. When I paid attention to it, I realized the kids were hearing the word “No” from me far more often on vacation than at home.

I got to my start step. Fortunately, there was this awesome climbing play gym thing the kids had been begging to use. My husband and I sat on a bench while the kids were kids. (You do realize that this is all they had actually been wanting to do. They wanted to run and climb, instead of looking at exhibits.) We had a great conversation.

Were some of those whining comments really an expression of overcharged feelings?

Later that day, we had a family discussion at dinner. This is what we tried: the first thing we did was acknowledge their feelings. We talked about the frustration and excitement and then disappointment when something turns out to be boring instead of fun. We reminded them of how vacation involves a lot of waiting.

Then, we took responsibility for the way that we behaved when we got frustrated or felt like things weren’t done the way they were supposed to be. We told them that we were going to work on it ourselves. We recognized that we could be impatient or demanding. The kids seemed relieved by that.

Then we laid out our expectations: we were going to expect pleases and thank you’s. Not just from the kids; my husband and I were also going to be very careful to use them ourselves. We said lots of please and thank you to other people, but we been forgetting to use it with our kids.

That conversation early in this week-long trip was definitely the turning point. I think it addressed the most important thing of all: trust. Now the kids could trust us that we were going to be paying attention to how it was for them. And because of that they were engaged and interested in getting along with us and doing what we asked of them. Within a day their behavior was so different: the rate of whining dropped by 75%. Our kids were showing us the loving hearts we knew they had. And we had a great family vacation.